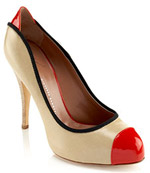 Even more old posts will be restored soon.

Everyone seems to be having fun discussing whether this blog is a publicity stunt.

Perhaps the media have been a little obsessed with this blog – which is why I deleted my 4 Inch Heels Only email account, I don’t need to court the media. But who needs to pay publicists when they talk about it to other publicists for free, same goes for mag hags and wanna-be mag hags 😉

If you want to know why I started this, read the piece the journalist (a real life award winning one – she was the young journalist of the year for 2006) wrote for the Sunday Telegraph.

This entry was posted in Uncategorized. Bookmark the permalink.

59 responses to “Some posts restored”